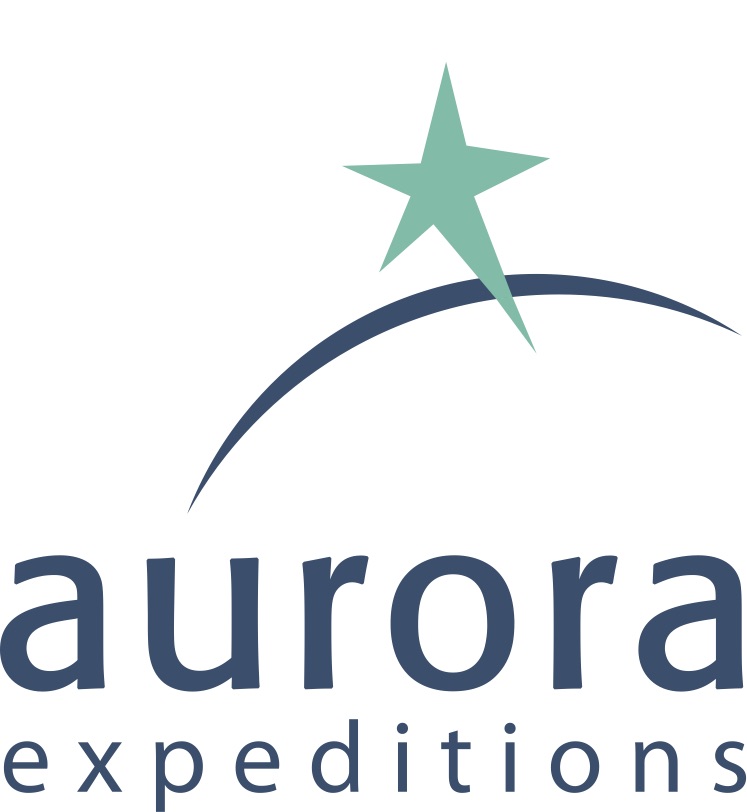 Aurora Expeditions will continue to focus on conservation and sustainable travel while whisking travelers off to remote, fascinating (and rather chilly) corners of the globe.

No lions and tigers here though – beginning in Santiago, Chile and ending in Ushuaia, Argentina, the voyage will delve into a polar world of incredible wildlife and intriguing history. 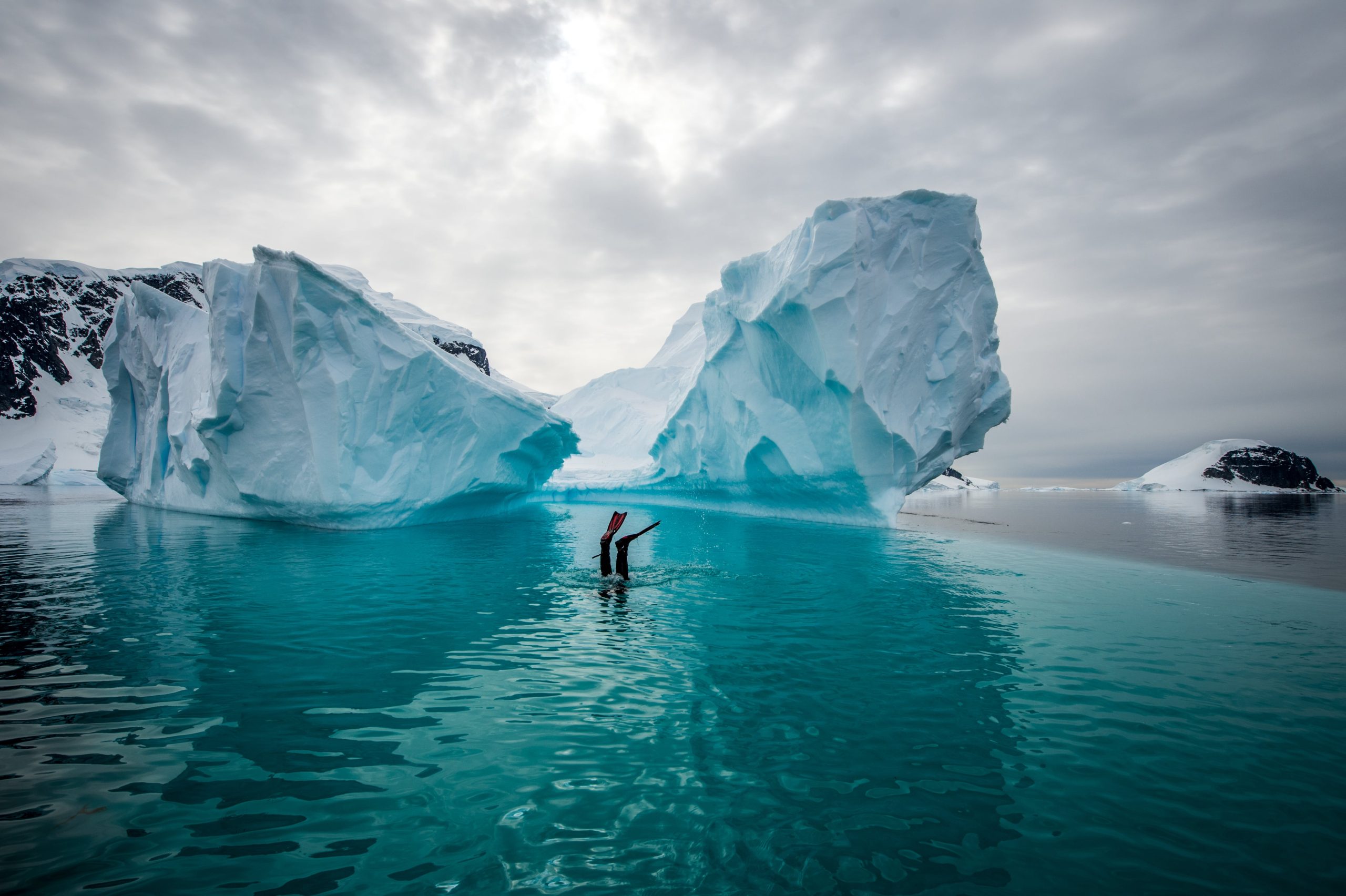 You’ll sail to the Falkland Islands on the first of the Sylvia Earle’s Aurora Expeditions cruises. Falkland’s capital Stanley has a distinctly British character, from an iconic red telephone box to English pubs, while the archipelago is an ornithologist’s dream come true.

Yes, the Falkland Islands are home to a plethora of delightful penguin species and the largest colony of black-browed albatross on the planet. Look out for seals, sea lions and dolphins, too. Eager to know more and impress others with your knowledge? Wildlife guides, books and binoculars can all be found in the observation lounge if you want to swot up.

You won’t just be cooped up on the ship, though. Aurora’s Antarctica expeditions – as well as those to the Arctic and beyond – generally make landings or Zodiac excursions twice a day so you can get up close to these charming critters – but remember to wrap up warm!

Next on the itinerary is South Georgia, a small island only 176km long with a 3,000m snow-capped mountain range. Fun fact, Captain James Cook thought it was the northern tip of a great southern continent when he arrived here back in 1775, how wrong he was about this diminutive spot!

Despite its size, though, South Georgia boasts some of the world’s largest congregations of wildlife; it’s famous for huge King penguin colonies and beaches bristling with Elephant and Antarctic fur seals. 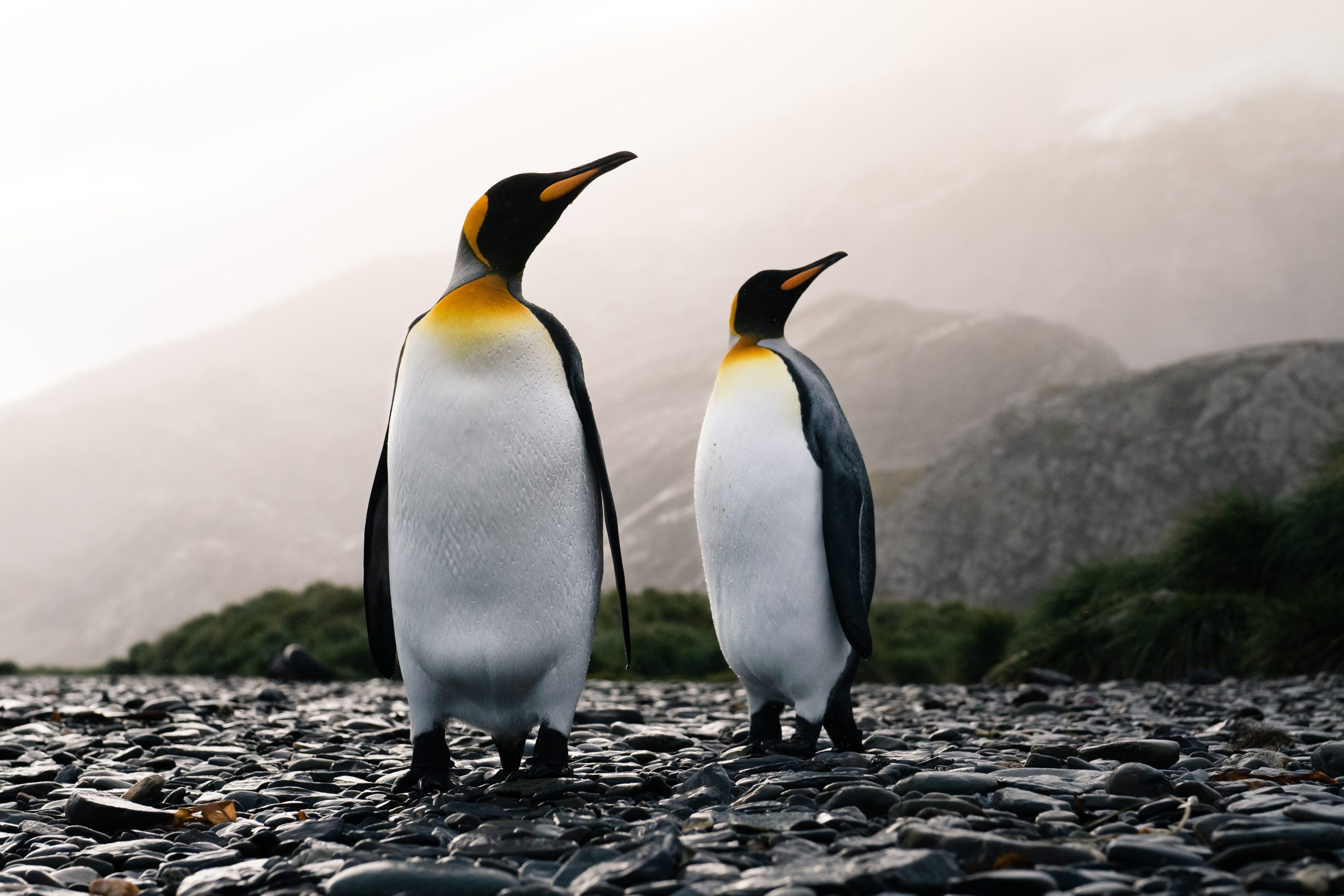 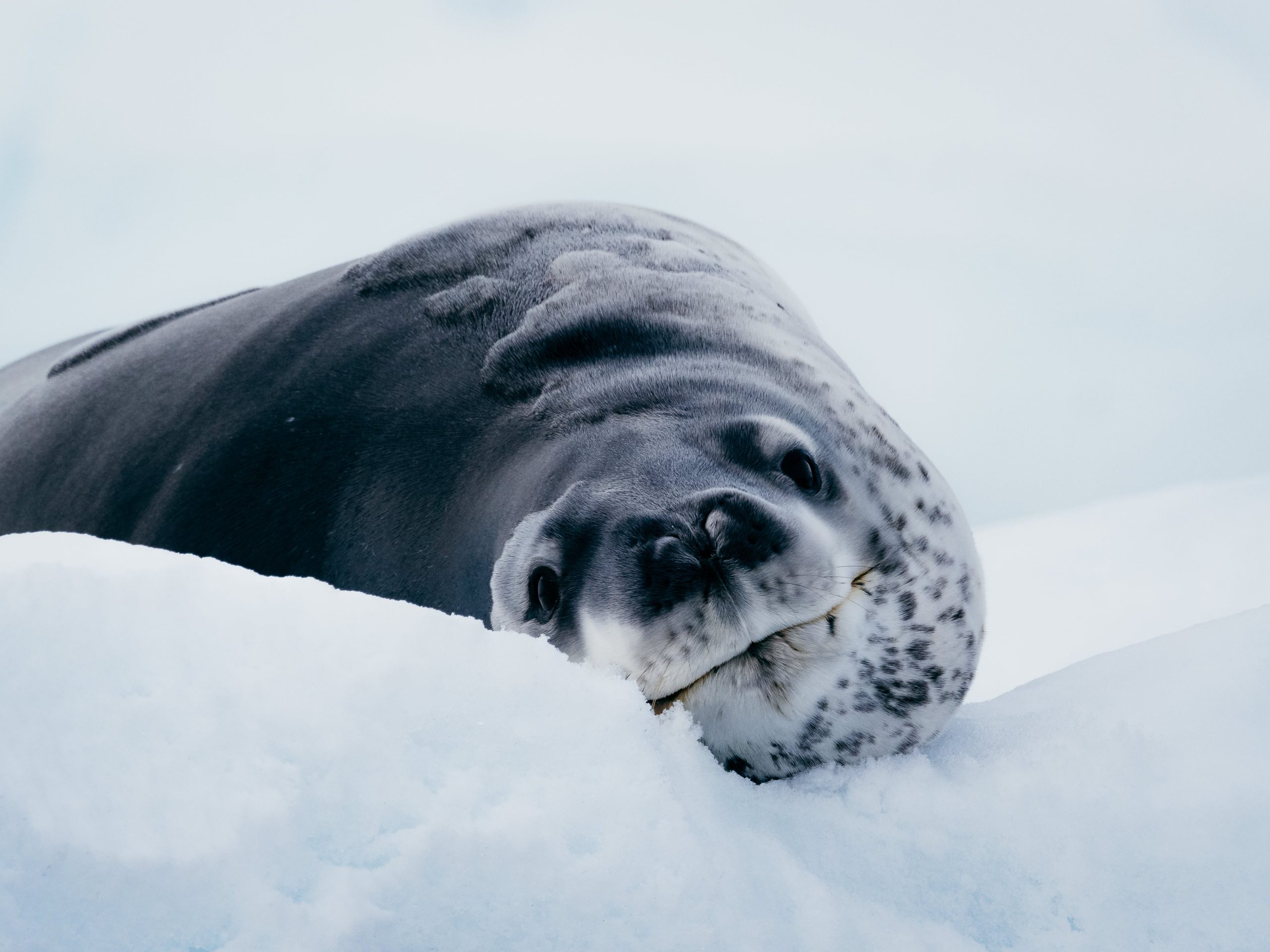 Did you know, seals can hold their breath in excess of 30 minutes? (Don’t try this one yourself). What’s more, they’re so well adapted to the freezing conditions thanks to their thick layer of blubber and fur they sometimes find Antarctic conditions too hot! We can guarantee you won’t feel the same way – luckily these ​​Aurora expeditions include complimentary three-in-one polar jackets as standard.

Zodiacs will take you to shore to walk amongst these wonderful creatures as Aurora’s experienced expedition team use their local knowledge to plan your voyage from day to day, picking the best options based on the prevailing weather, sea state and wildlife opportunities.

Excitingly, expedition passengers will also have the chance to trace the history of Sir Ernest Shackleton’s infamous journeys here.

The famous Irish explorer and two members of his crew on the ship Endurance completed the first crossing of South Georgia in May 1916. It was the final stage in a Homeric voyage considered one of the greatest feats of survival of all time – so be sure to quiz the pros onboard your Aurora Expeditions ship who will be able to tell you all about it! 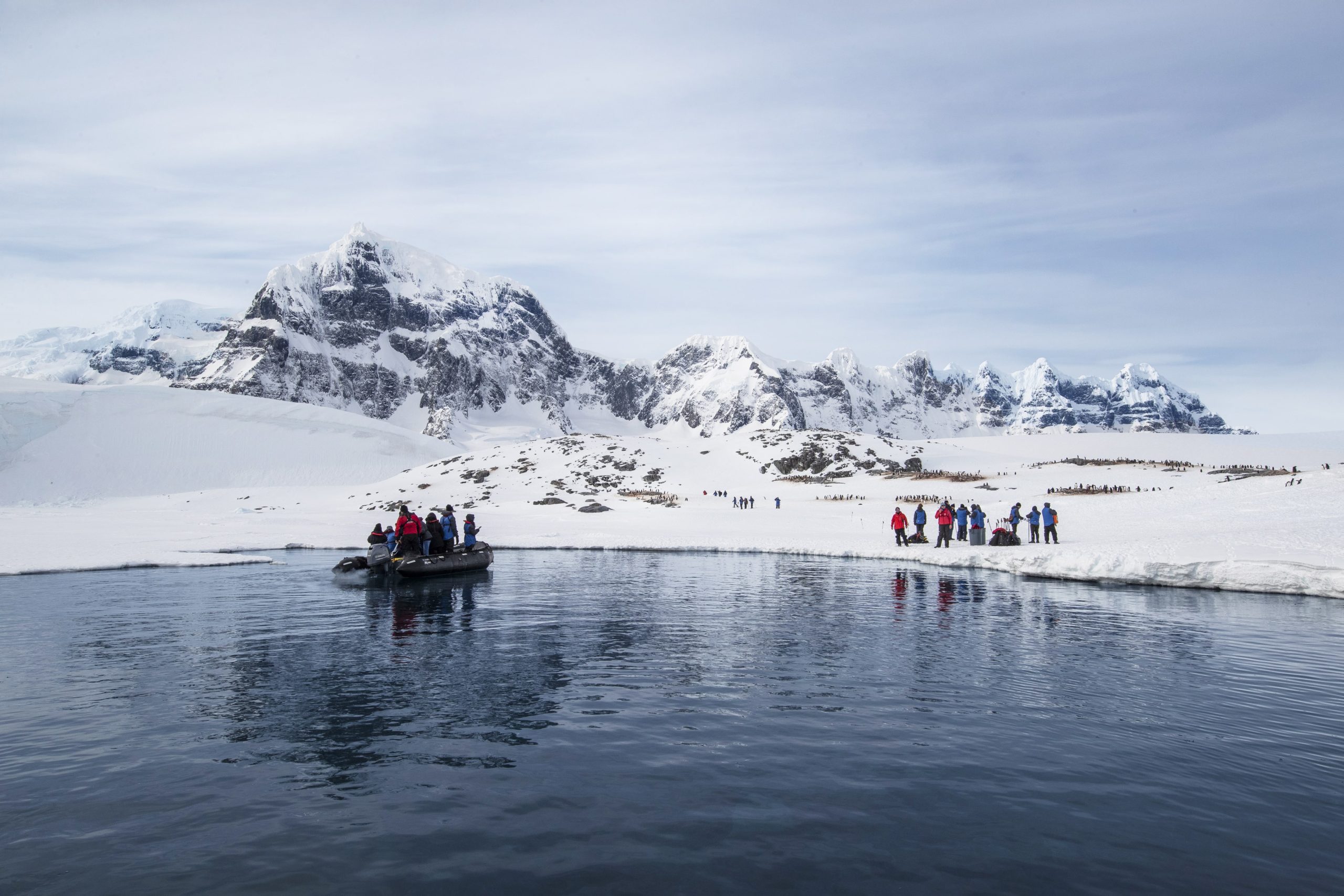 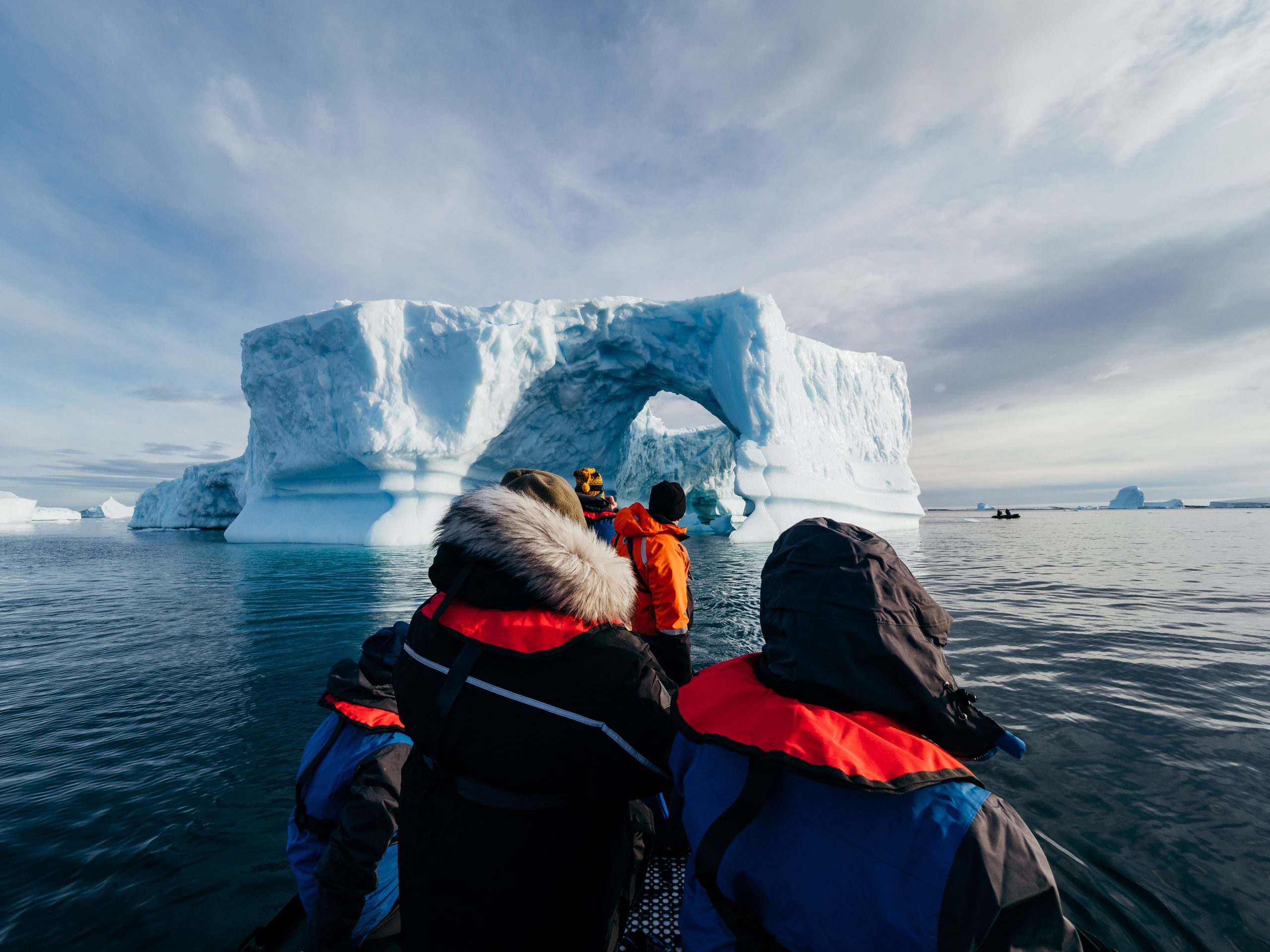 Passengers on the Sylvia Earle, however, needn’t worry about any such discomfort and hardship on Aurora’s state of the art ship.

Every stateroom onboard the Sylvia Earle has an ocean view and nearly all the rooms have balconies. They offer a king-sized bed (or twin beds), a desk area, a private en-suite, a 42” flat-screen TV, a safe and a room-controlled thermostat.

On Aurora Expeditions cruises, there are three categories of Aurora’s Balcony Staterooms, classified as A, B or C depending on the cabin size. Aurora Stateroom Superior cabins are perfect for those who want a bit more space while suites offer the most luxurious accommodations.

The singular Captain’s Suite is the largest of all the Sylvia Earle’s rooms and includes a large lounge area, balcony, walk-in wardrobe and en-suite. Poor Shackleton, he had no idea how easy future polar adventurers would have it.

What’s more, the Sylvia Earle accommodates an average of 132 expeditioners per voyage so you can be sure of an intimate journey with plenty of attention from crew during your expedition. OK, we’ll have another glass of wine then. 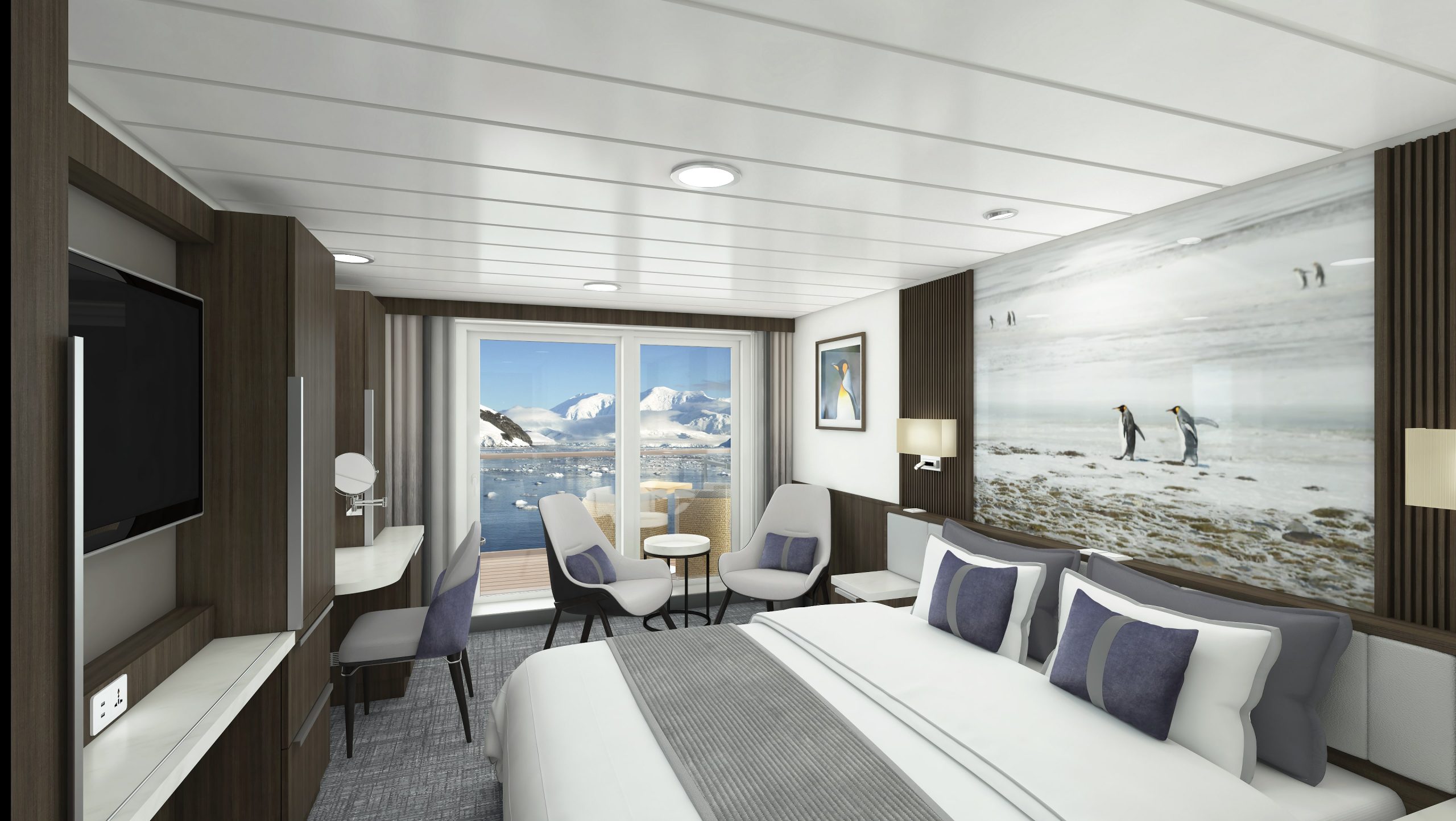 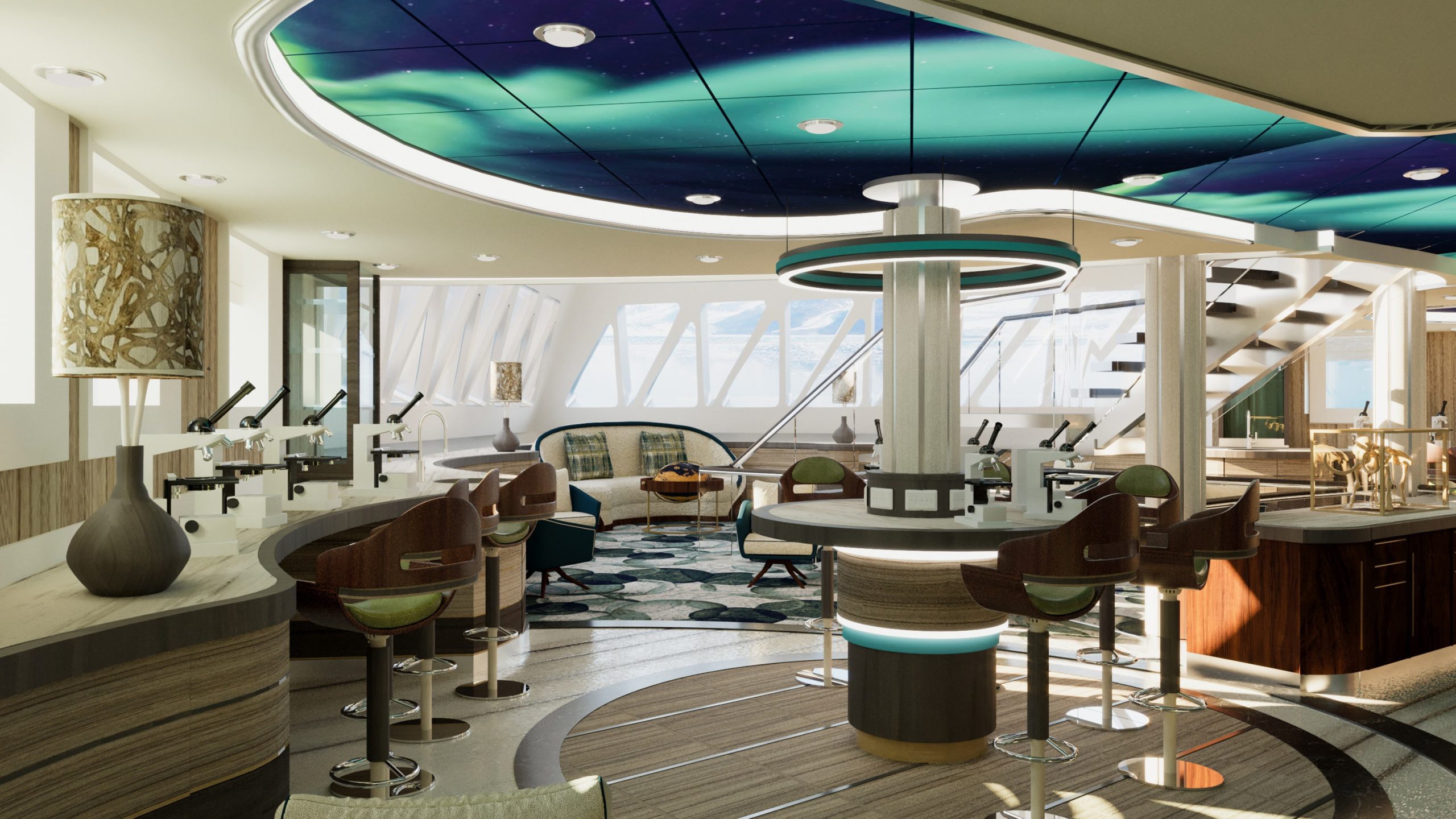 Another advantage of the new ship is its revolutionary Ulstein X-Bow, which provides improved stability in rough seas, allowing for faster and smoother sailings. The feature also ensures reduced environmental impact – just one of the ways Aurora is showcasing its green credentials; the vessel is also certified 100 percent Carbon Neutral and is outfitted with a dedicated, fully equipped Citizen Science Centre.

The new purpose-built Aurora expedition ship is intended to be a floating ambassador for the conservation of the planet. Indeed it’s named after renowned oceanographer, marine biologist, explorer and conservationist Dr Sylvia Earle.

What was Sylvia Earle famous for, one might ask. One of Time magazine’s “Heroes for the Planet,” Earle, now 86, has led more than a hundred expeditions, logged over 7,000 hours underwater, and has authored more than 190 scientific, technical and popular publications. And to think we struggle with motivation to get to the local swimming pool.

Aurora Expeditions has also paid tribute to six pioneering female conservationists from around the world alongside Dr Earle, who are honoured on each of the ship’s public decks: Jo Ruxton, Dr Asha de Vos, Hanli Prinsloo, Dr Carden Wallace AM, Bernadette Demientieff and Sharon Kwok. 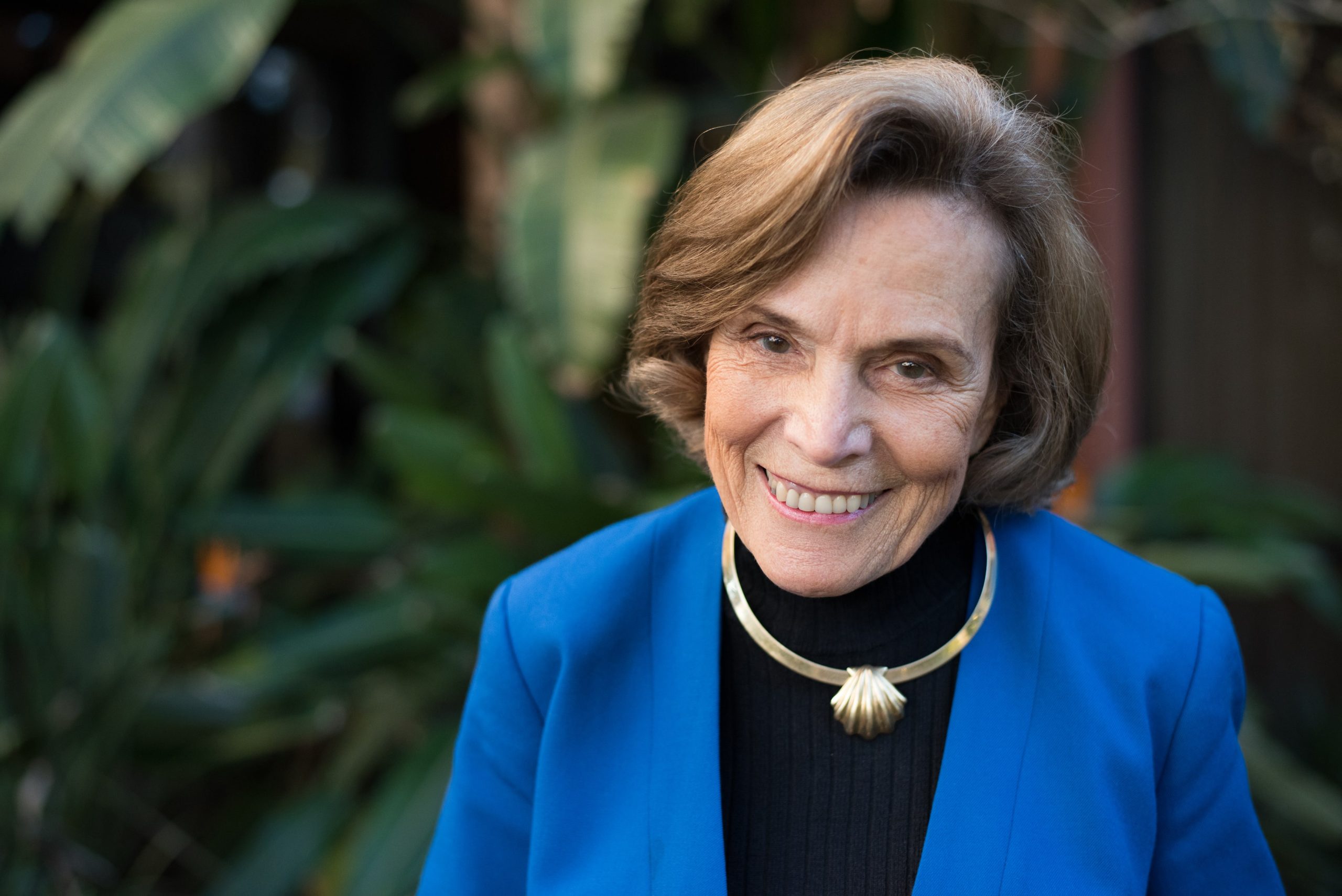 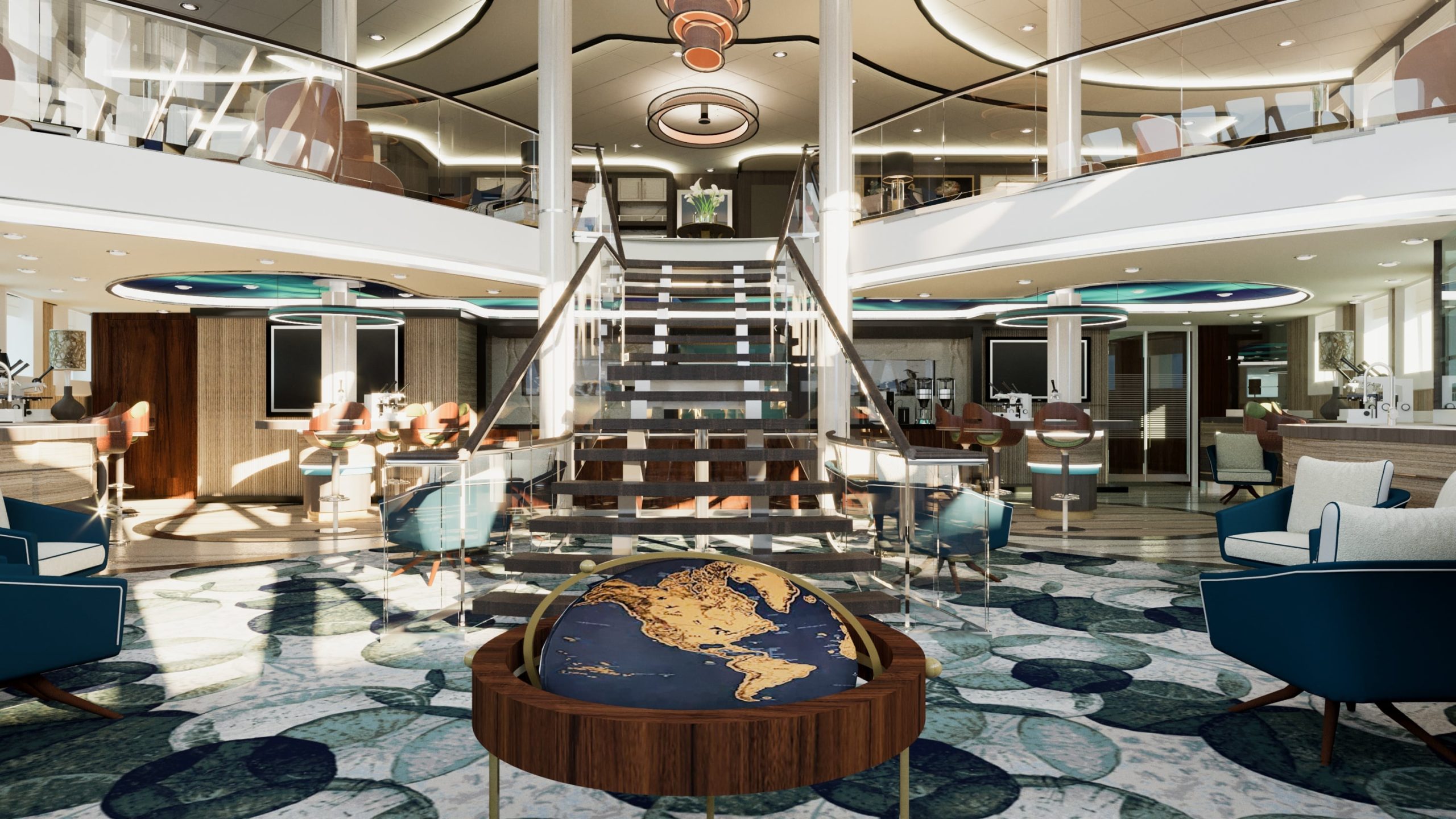 Keen to get onboard and meet the amazing Earle herself? In February 2023 the Sylvia Earle ship will host an Aurora Expeditions Antarctic Climate Expedition. Led in partnership with non-profit organisation Ocean Geographic, the voyage will tackle the consequences of environmental change, the warming climate and the loss of sea ice in the southern polar region whilst visiting some of the most spectacular wilderness regions of Antarctica.

Comprising conservationists, high-profile personalities and ocean luminaries, the summit will increase public and government awareness of the majesty and significance of the Antarctic, whilst also formulating an outcome of 23 resolutions to inspire transformative change for global net-zero emissions by 2050. Other outcomes will include a series of lectures, a feature documentary, exhibitions, and a book.

In honour of 2022’s World Oceans Day, Aurora Expeditions has announced an exclusive release of ten additional staterooms on the trip.

Applications for these sought-after spots – limited to about 100 expeditioners from around the world – are open to all that are interested, with Aurora particularly welcoming registrations of interest from thought-leaders in the fields of science, art, education and economics, alongside curious teenagers and corporate executives. Applications for the exclusive cabin release on this Aurora expedition ship are open until June 30, 2022, so get cracking!

Find out more
Published 08.06.22
Back to posts
Canaries