Falkland Islands cruise vacations are the best way to visit this wild and remote British outpost in the South Atlantic ocean – so what’s it like to explore the Falklands?

“I was nine when Argentina invaded but was never really scared,” says Andrew, the pilot, dipping the small aeroplane several hundred feet above the cool-blue Atlantic to follow a whale. “Suddenly, I was surrounded by bombs, guns, and helicopters,” he adds. “It was every boy’s dream.”

There was no bravado meant. To be a Falkland Islander, to absorb its isolation, inclement weather and wider geopolitical uncertainty, requires a rugged spirit and a keen sense of adventure.

I was using the FIGAS light aircraft service to hop between several of the Falklands’ islands. The survival instincts and earthiness of the Falklanders added substance to a week spent hiking, over-eating too many great British puds and relishing the finest wildlife-watching I’d experienced outside the Galapagos. 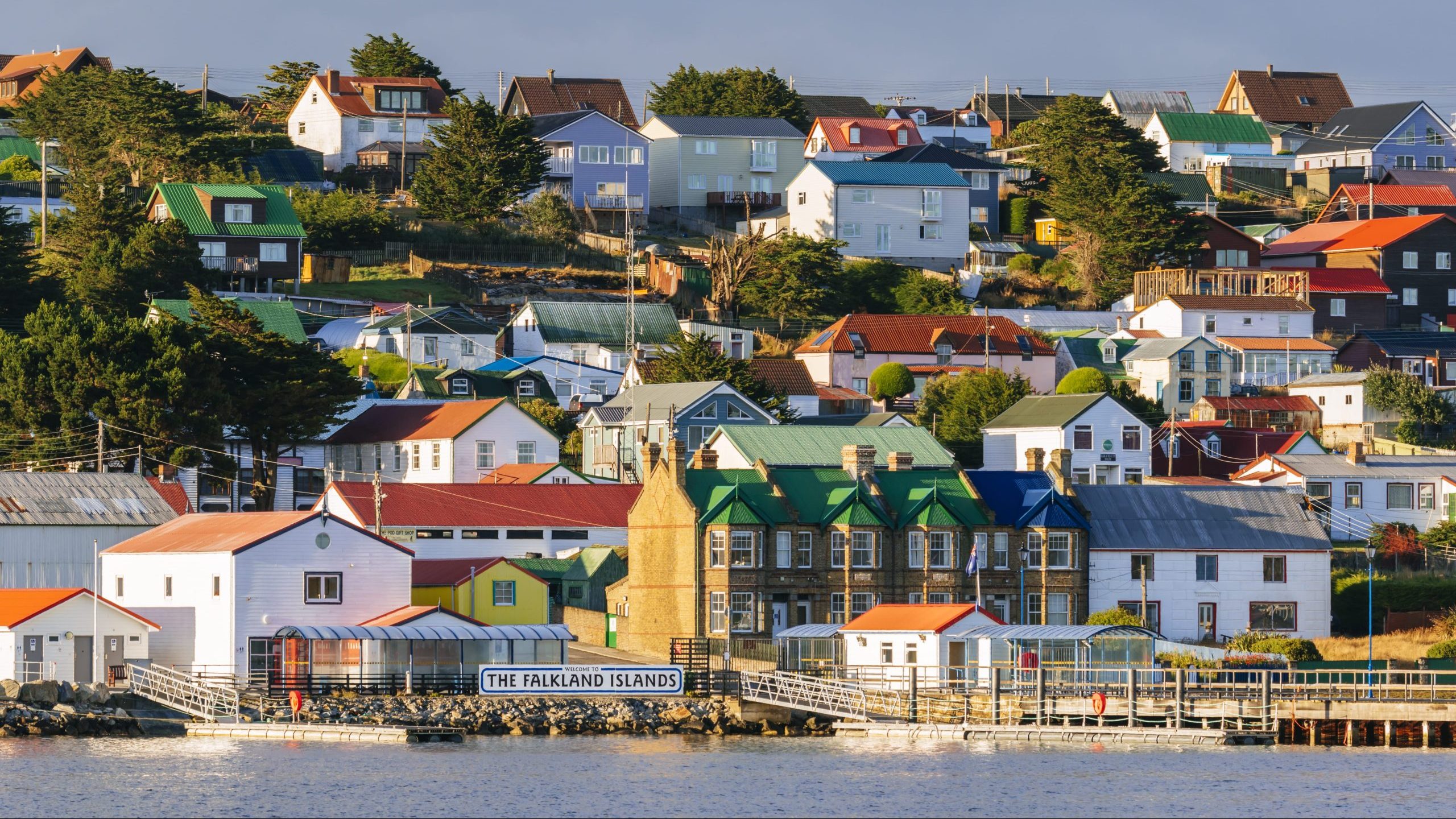 In search of adventure

My journey began in Stanley, set on a craggy sound on East Falkland island. I wouldn’t say Stanley is stuck in a time-warp but it’s packed with iconic Britannia, from Union Jacks bridling in the breeze to pubs and fish ‘n’ chip takeaways, small bungalows, red telephone and post-boxes and even a drive honouring Lady Thatcher.

Lucrative fishing revenues have created prosperity here while migrant Chilean workers add a dash of the cosmopolitan. But I’m here for the wildlife.

With over one million penguins throughout the Falklands, an essential two-hour excursion from Stanley is to Volunteer Point to see the 1,000-pair colony of King penguins – second only in height to the giant Emperor penguins found in the Antarctic.

Driving me there is an unassuming hero from 1982, Patrick Watts. He’s steely and modest, making a living from guiding. We pass two downed Argentine Chinooks, twisted metal corroding in the peaty heather moorland.

Patrick had been the commercial radio broadcaster when Argentine forces took Stanley. “I told their commanding officer I wouldn’t broadcast their messages to the islanders with a gun pointed at me,” he says.

“We’re resolute people, tenacious, and proud to be British,” Watts tells me. “We have every intention of retaining our right to self-determination.”

In a 2013 referendum to ask the islanders whether they wanted to remain a UK overseas territory, 90 percent turned out to vote – and only three people voted ‘no’.

Equally resolute are Volunteer Point’s King penguins, facing blustery gusts and clustered like a convention of silver-service waiters. With treacly golden stains slopped down their white bibs, they arch their heads skywards making a fearful noise. Fluffy chicks are tucked between their feet and they waddle down a pearly-white beach to torpedo into the frothy surf. 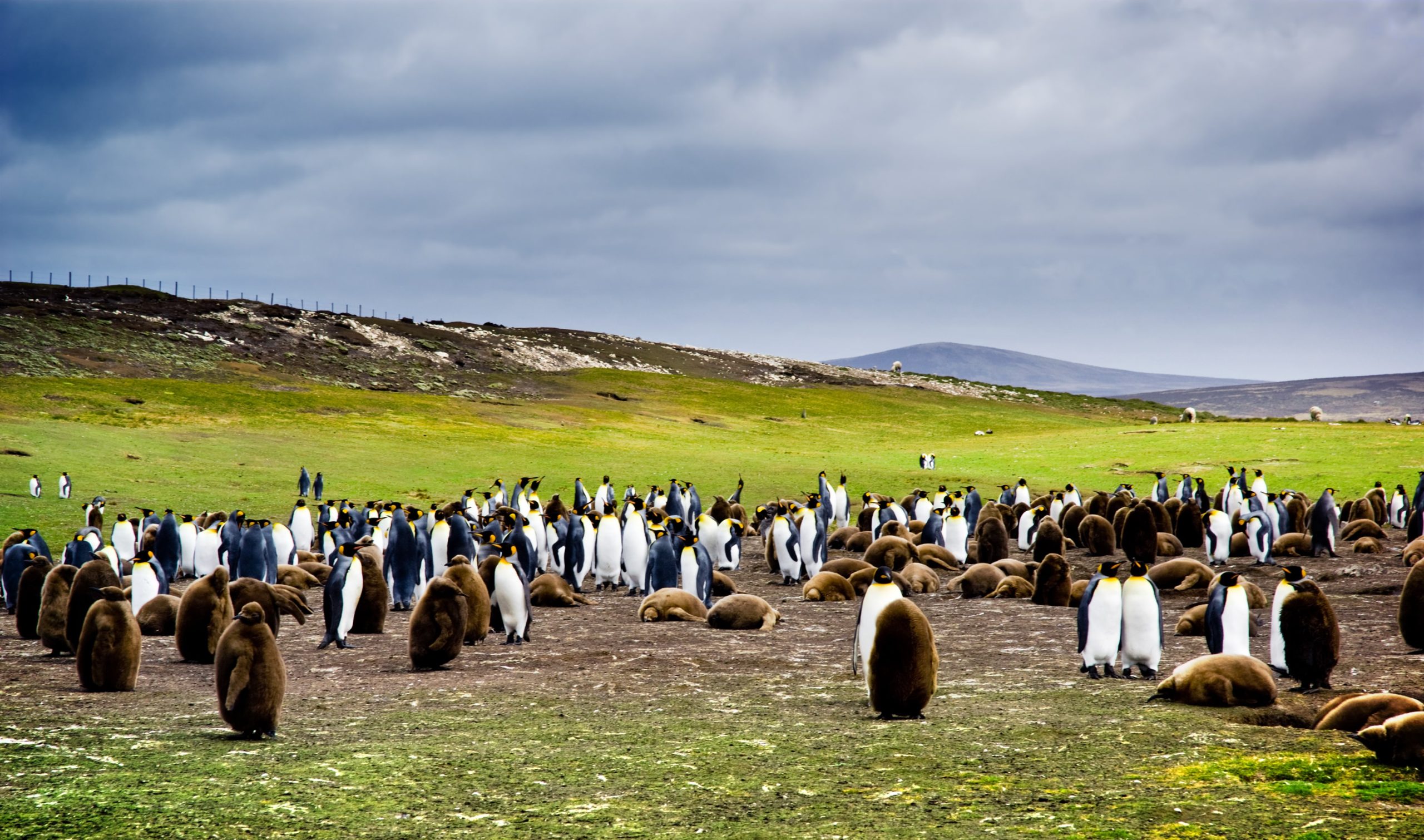 I spend most of my week island-hopping using the FIGAS flights service. I look down from the skies at a brooding, shattered archipelago, indented by sandy bays and dark cliffs, embraced by the aquamarine sea that’s striped by huge kelp fields.

It takes even hardier souls such as Mike and Phyll Rendell, owners of 5,000-acre Bleaker Island, to thrive outside Stanley.

Bump landing onto Bleaker’s grass airstrip, I spot Mike waiting for me. He farms Herefords and merino wool sheep and hosts visitors in Cassard House, a cosy, red-roofed bungalow with five rooms on a coastal headland. He’s a gentle man. Ex-military. “I was stationed here in 1983 and never wanted to leave. I still think I’m on trial, Falklanders are a tough lot to please,” he laughs, self-deprecatingly.

Either side of afternoon tea served with jammy, homemade Victoria sponge, I loved being left to hike solitarily around Bleaker’s flat grasslands, simply blown away both physically by the winds and metaphorically by a Serengeti-like density of wildlife.

Living up to their nickname, Magellanic penguins bray like jackasses. When spooked, they hustle comically around in packs, occasionally toppling over before diving into their burrows. Taller gentoo penguins are less fearful, sidling up as I eat my sandwiches on a gloriously deserted beach.

Yet it’s Bleaker’s birdlife that truly captivates: tussacbirds, plovers and sandpipers; all hors d’oeuvres for a mesmerisingly noisy land colony of 8,000 imperial cormorants, huddled together defending their chicks from predatory skuas. 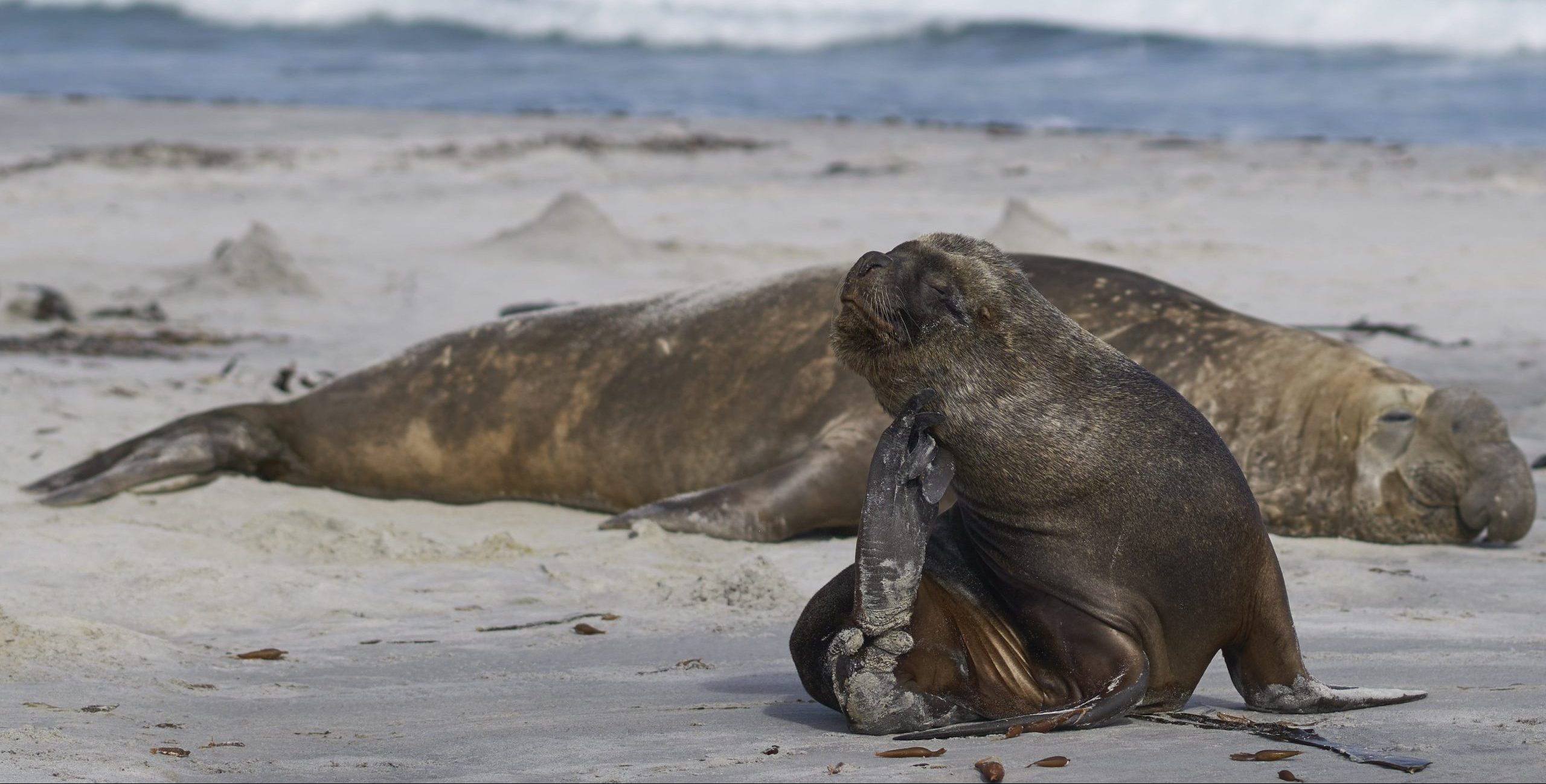 I take flight myself next day to Sealion Island, a dedicated nature reserve. I hike for six hours, alone again. At a windswept clifftop memorial for HMS Sheffield, sunk by an Exocet missile in 1982, 40 miles offshore, I can’t think of a better tribute to those lost mariners than the island’s vibrant natural life.

Around the memorial, rockhopper penguins vigorously bounce around with scrunched Angry Birds faces sporting wild eyebrows and Mohican quiffs. With flat, sandier beaches to the south, it’s perplexing why they choose to access the ocean by hazardous hops down perilous cliff ledges, sometimes swept off them by rogue waves.

Perhaps there wasn’t space enough for them on the southern beaches occupied by burping, farting, groaning, inert mounds of wobbling blubber. It’s February, so the elephant seals are resting after breeding. The bulls weigh up to three-and-a-half tonnes. Ironically, they spend some of the year along the Argentinean coast.

“The Argentinians have landed again,” jokes Filippo Galimberto, a weather-beaten Italian biologist who has studied them for 19 seasons. 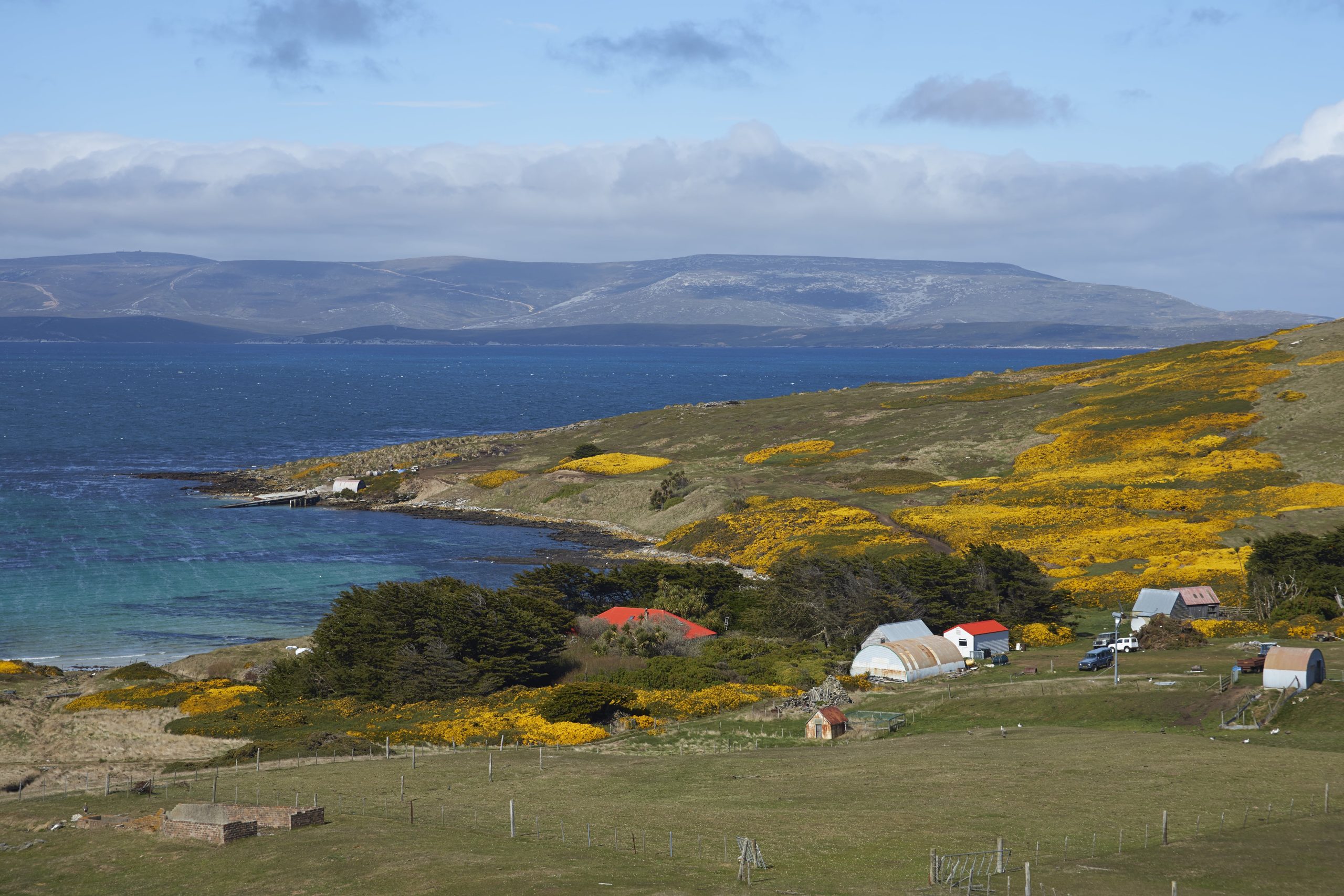 Rob rumbles around Carcass in his antique Land Rover, his sheepdog chasing behind, ferrying visitors about or checking livestock. “I’m an outdoors person. Whenever I go to Stanley, I want out,” he says, as if the tiny capital were somehow a snarling metropolis.

“You improvise in the Falklands and get on with life, says Lorraine at their homely farmhouse, sheltered behind wind-screwed pines. She admits they were struggling to make ends meet before tourism took its tentative first steps after the conflict. “I started out baking cakes and making high tea for cruise ship passengers.”

During 1982’s conflict, Lorraine and her children were in Stanley, separated from Rob. They escaped via a mercy convoy from the capital taking schoolchildren boarders back to their rural farmsteads. She says they syphoned petrol to keep the vehicles going en route. “It was a surreal journey, she remembers.

Their most memorable wildlife excursion is by boat to West Point cliffs. There, I sit transfixed for hours among a huge colony of nesting albatross possessing Galapagos-like fearlessness. Their six-foot wings occasionally brush my head as they take off and their downy, turkey-sized chicks squawk relentlessly for food.

On the way back to Carcass, the boatman’s wife, Jeanette Clarke, relates their Falklands conflict experience. They’d been held captive by Argentine troops in a farmhouse.

“When the British commandos knocked on the door, we were ecstatic,” she remembers. “We housed the soldiers in our living room and I baked cakes and washed their socks.”

The events of 1982 marked a turning point for everyone living on this beautiful, otherworldly South Atlantic archipelago. Life is tough here. Yet experiencing the Falklanders’ passion to make something of its harshly challenging terrain, and their fierce independence, makes for an inspiring journey.

Find out more
Published 02.07.22
Back to posts
Families

Central America is a hub of thrilling adventures, fantastic wildlife and brilliant beaches.

From turtle hatchlings to gray langurs monkeys and majestic elephants, Sri Lanka is home to the most magnificent creatures.