The ‘pinch me’ moment comes on the final night of our Greek cruise. As the sun sets below the ocean and we sail through mirror-still waters of the Gulf of Corinth, a pod of dolphins spots our boat and puts on a spectacular display of pirouettes and somersaults alongside us. It is so ridiculously choreographed it’s almost as if it had been planned on purpose.

“You have to pay extra for the dolphins,” laughs Marco, the chief steward of the Elysium, as he and all the staff look on in awe.

I wouldn’t have been surprised if the dolphins had indeed been orchestrated by the crew; the staff couldn’t have done enough for us all week.

The Elysium is the first and only ship from Elixir, a new family-run cruise company that started sailings last summer and is already shaking up the industry.

The focus here is on wellness: there’s a spa on board plus free morning and afternoon Pilates classes. They have three week-long itineraries so far: Divine Cyclades; Treasures of Oman, a winter sailing from Muscat; and Ancient Paths, the circular route I was on around the Peloponnese, a four-fingered peninsula in the south west that’s joined to the mainland by the Corinth Canal. 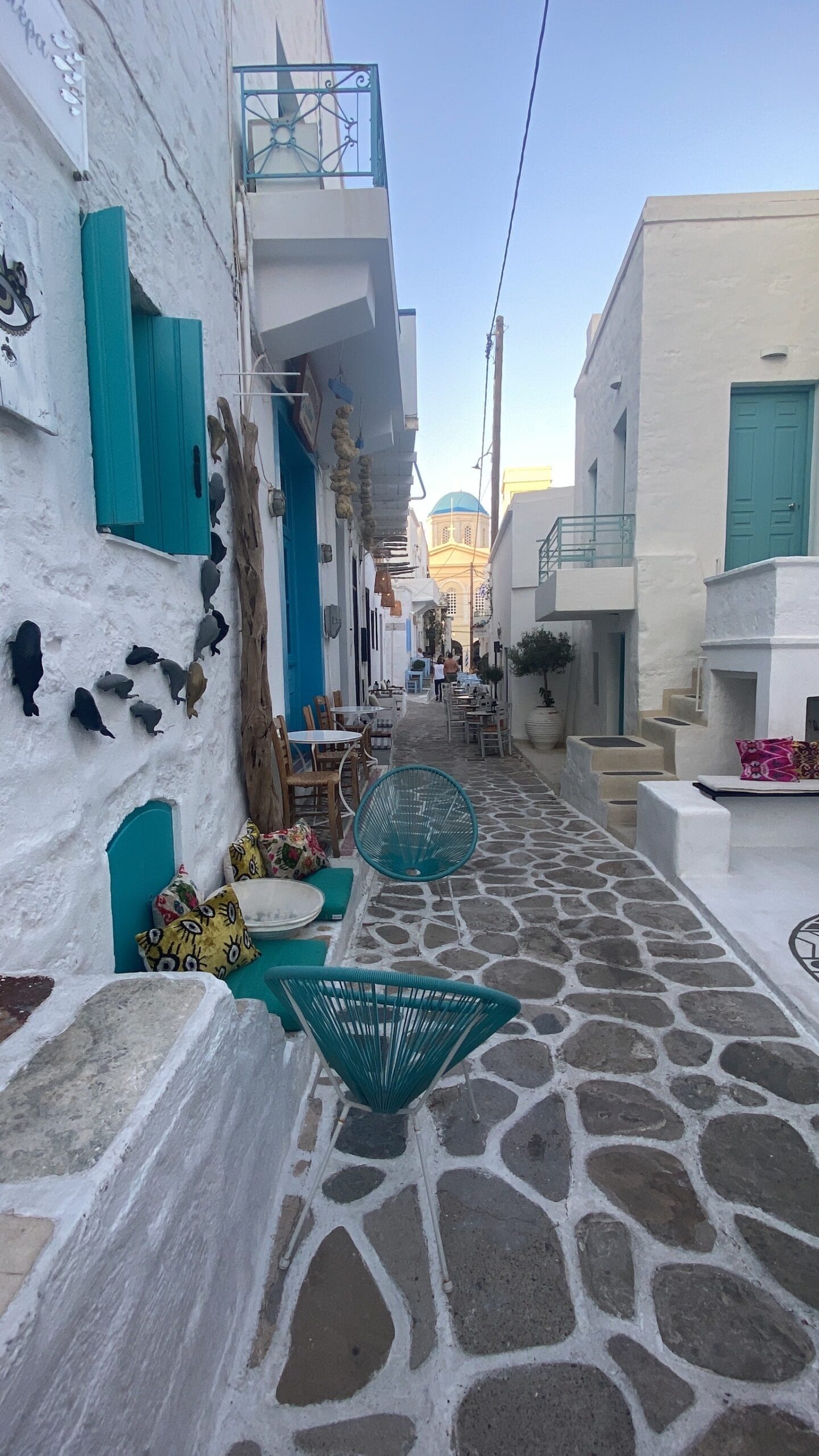 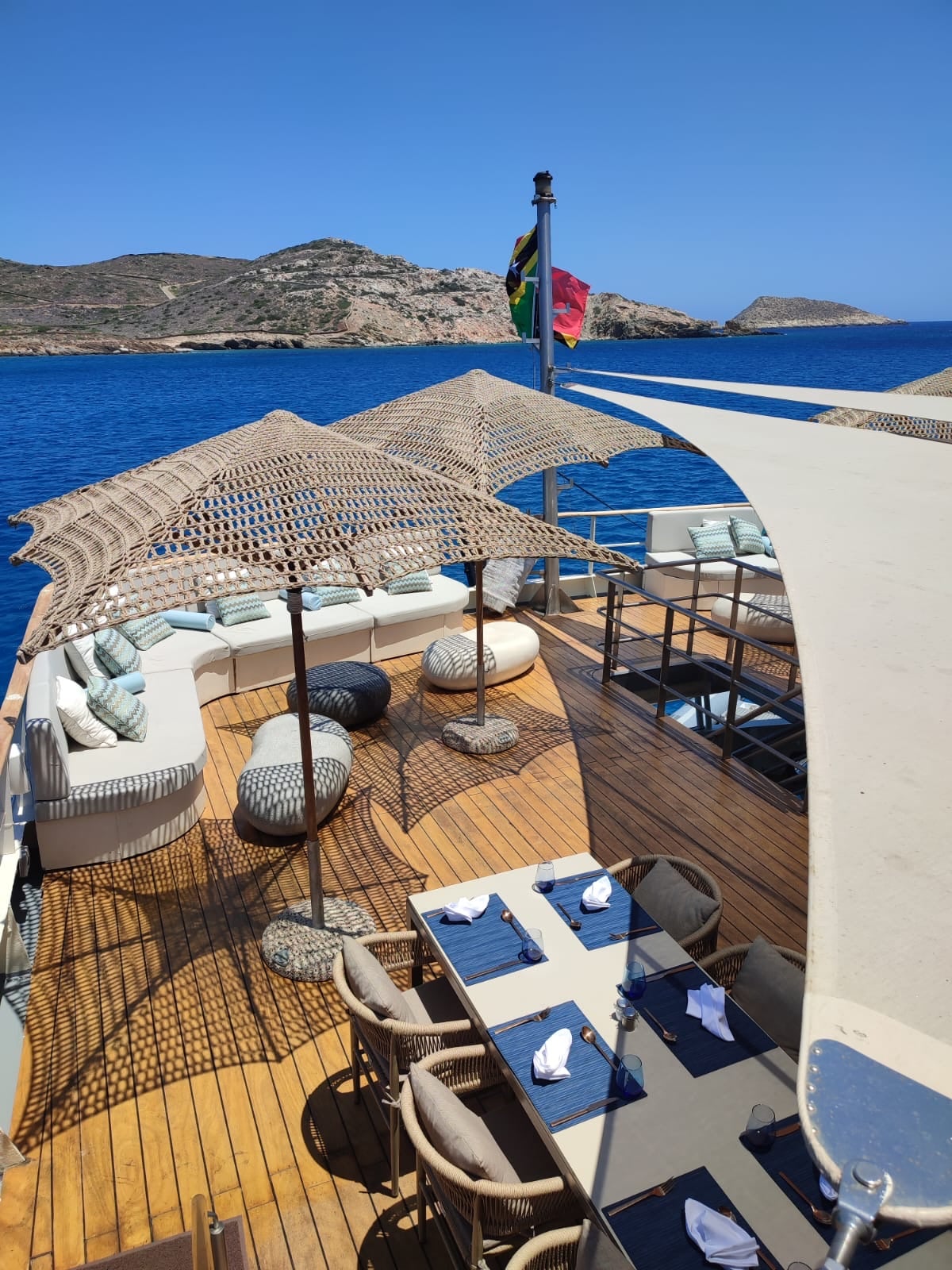 Elixir being a boutique cruise company, the feel is very high end – but thanks to its small size also incredibly homely. There are 25 spacious cabins – decorated in soft blues and cream – which means a maximum of 50 guests on board at any one time.

The ship was formerly part of Celebrity Cruises’ fleet in the Galapagos Islands until it was bought by Greek Ioannis Terdimos – who is also on the ship with his family – during the pandemic and completely refurbished.

We board mid-afternoon at Lavrion port in Athens and after an evening on the chi-chi island of Hydra we wake up for breakfast and the first of our daily swim stops on Fokiano beach: deserted save for a solitary beach bar and the sound of the sea sucking pebbles on the shore.

The Elysium has two kayaks and a paddle board for guests plus a lot of snorkelling gear. You can also go scuba diving or water skiing – though this has to be arranged in advance.

Swim stops are punctuated by lunch on board consisting of a buffet of crisp Greek salads, charred octopus and slabs of moussaka. Grab a plate and sit wherever you want to, Ioannis wants you to feel at home. During the hottest part of the day we sail to another port for the evening and guests have a cocktail and a snooze on the sun deck. 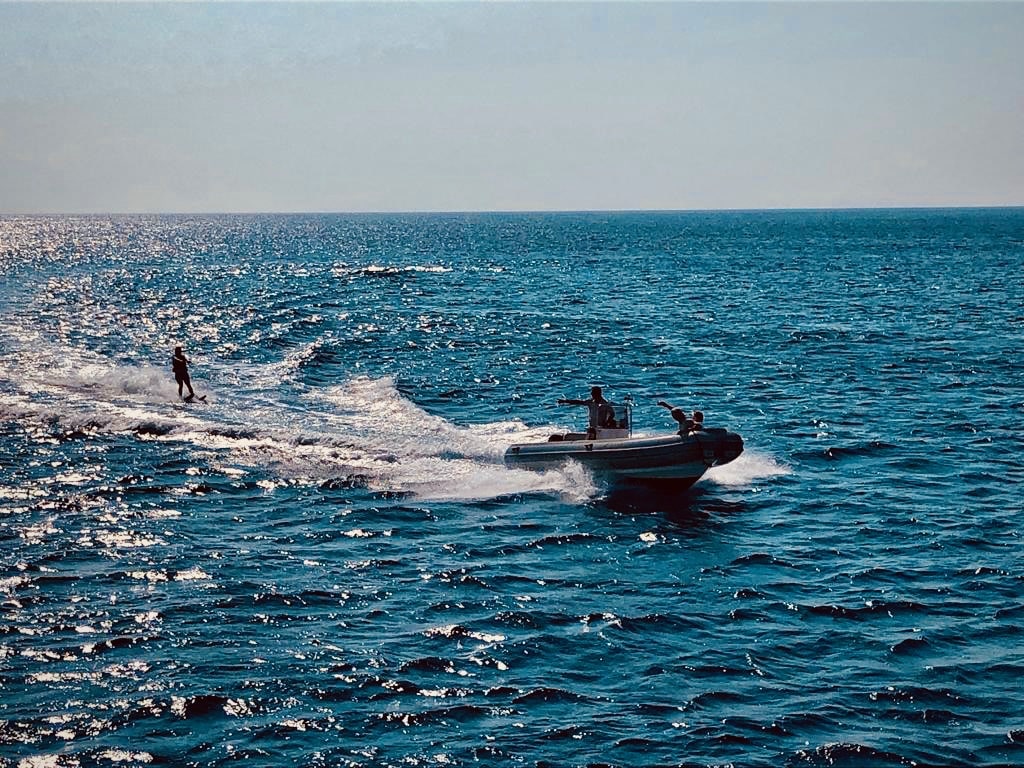 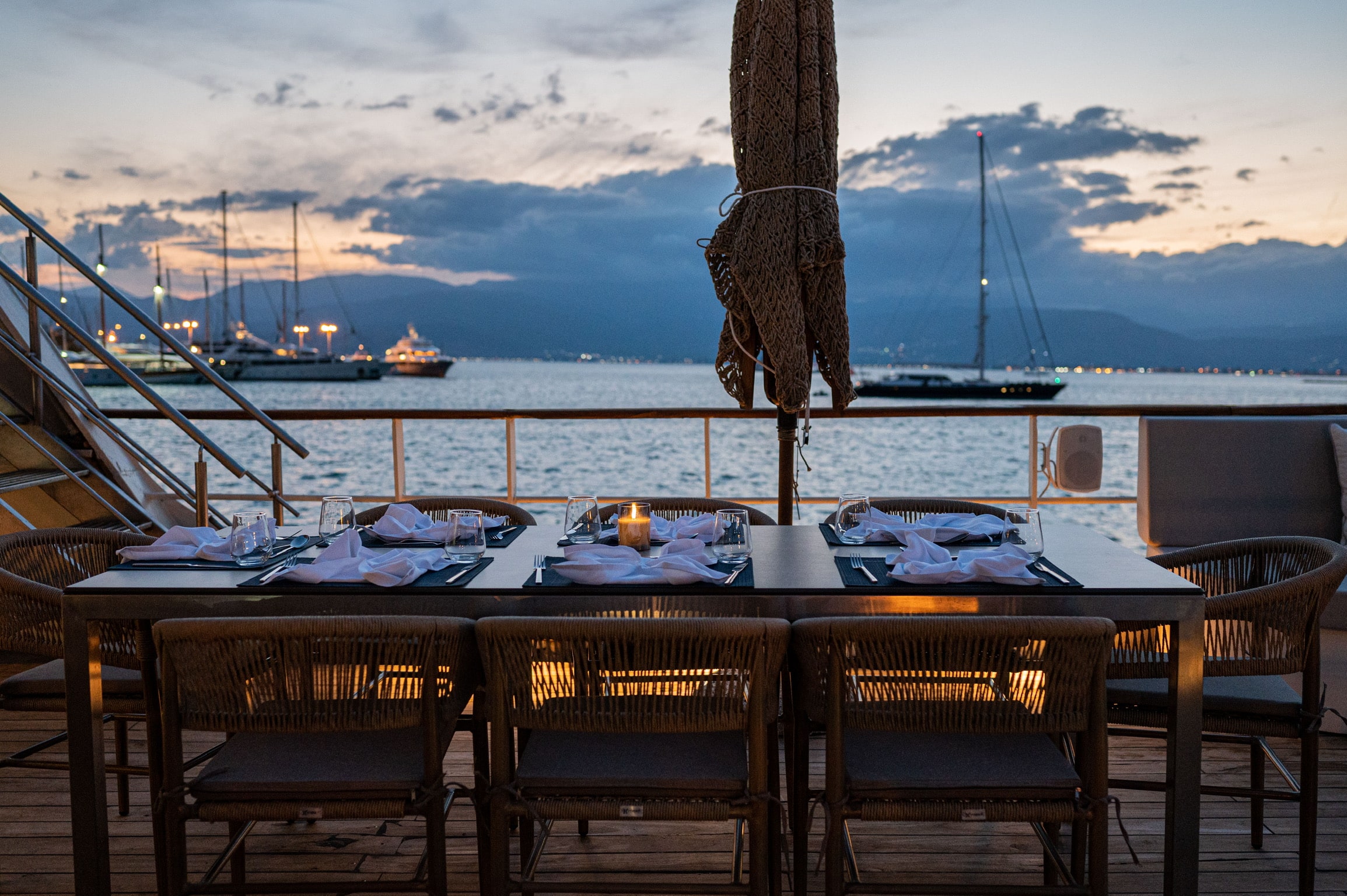 The cruise is half-board, which turns out to be refreshing. Having the freedom to choose a bite of fast-food souvlaki, grilled fish at a taverna or a fine-dining restaurant keeps everyone on board happy – plus puts money into the local economy.

Perhaps the most spectacular stop is the medieval town of Monemvasia, linked to the mainland by a causeway, but the small, lesser-visited ports of Pilos and Gythio are low-key and authentic. There’s a mixture of stops on islands, like the wide buttercream sands of Elafonisos and forested Ithaca; as well as secluded pebble bays on the mainland that would otherwise take hours to scramble to – had we not been on the ship of course.

One advantage of cruising the Peloponnese in July: it feels blissfully deserted. While islands such as Santorini and Milos are choked with European tourists in the summer queuing for sunset selfies, the ports of the Peloponnese attract rich Greeks who know the best marinas in which to anchor their super yachts. You won’t find mammoth cruise ships here: often the dinky Elysium was the biggest boat in the harbour.

Excursions don’t come cheap at £60 per person to go to Delphi, but there’s a guided tour around the ancient archaeological site – including the skeletal ribcage ruins of the Temple of Apollo – and the view of the sweeping Pleistos River Valley on the way up Mount Parnassus is breathtaking (if a little hair-raising as the minibus navigates around the hairpin bends). 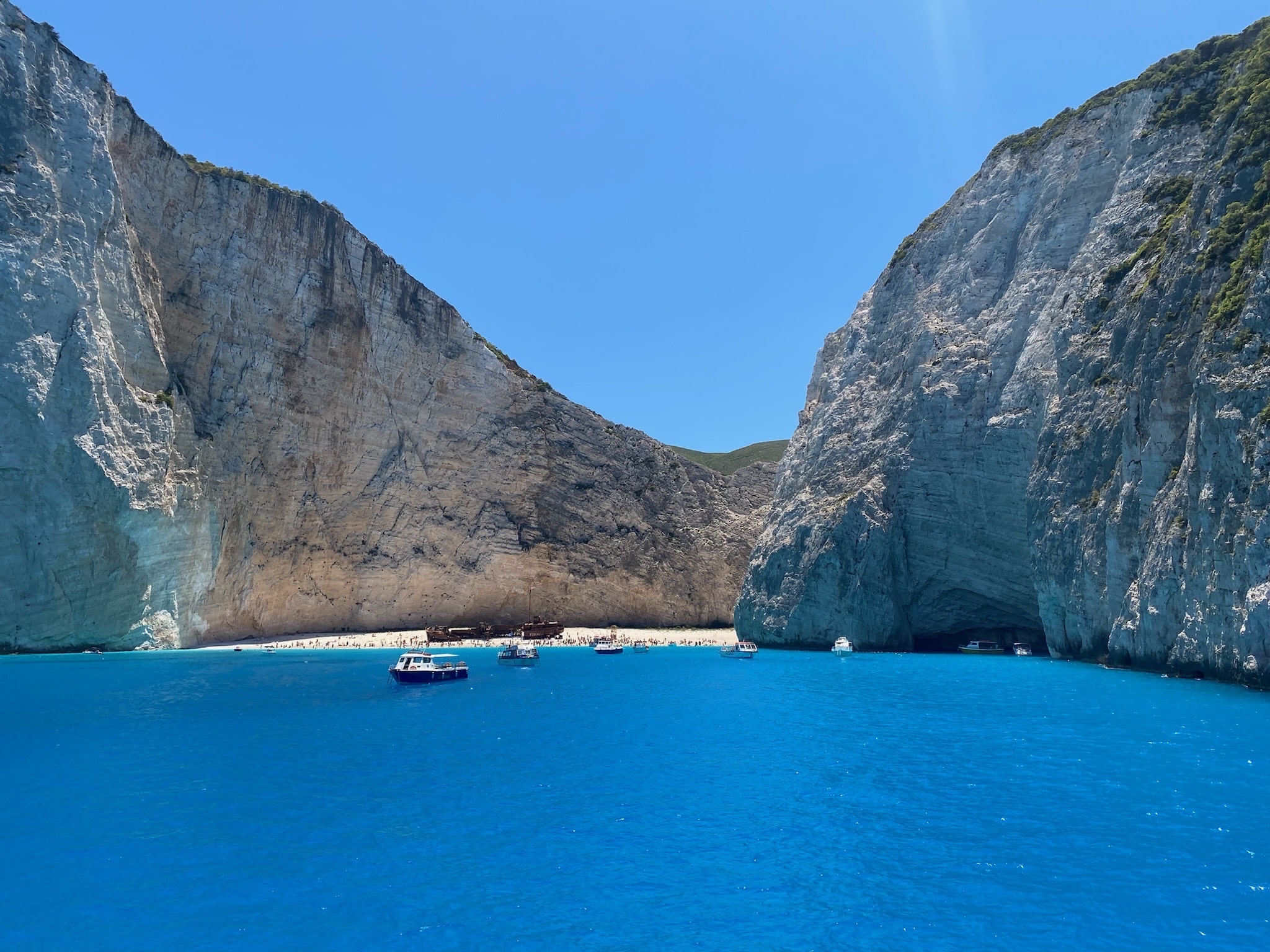 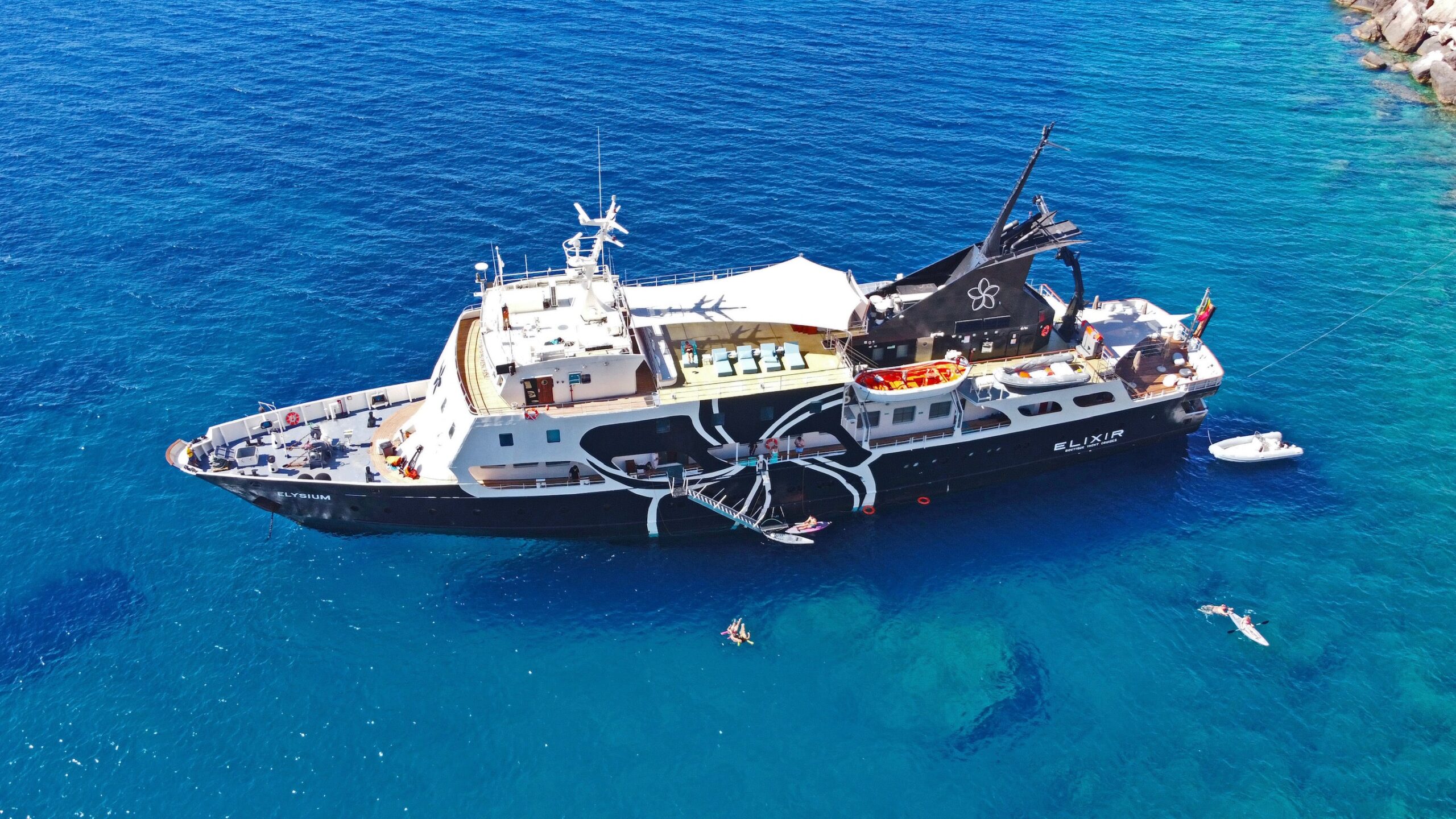 Back on board, the main hub of the action is the Elysium’s main deck, where red-haired and tattooed Eva – who has worked in the coolest cocktail bars in Athens – shakes up zingy picante margaritas in the shade. Late at night when the boat is bobbing in the harbour, I play Scrabble and cards on communal tables with other guests as though we were on the terrace of our own private villa.

One day I try a Balinese massage using organic Greek products in the ship’s Gemaya Spa – which is just a slightly bigger cabin with a solitary massage bed in the middle. Despite the hum of the engine, I zone out completely – it’s one of the best I’ve ever had.

Fellow passengers came from the UK, USA, Australia, New Zealand and Spain and there was a mix of singles (though Elixir does charge for single supplement) as well as groups of friends. One couple were celebrating their 40th wedding anniversary on board, but there were also couples in their early 30s reclining on the Elysium’s plush cream day beds.

As well as a performance from the dolphins, the final night is a Greek night onboard where our chef Mersina does a cooking demonstration (though everyone is too distracted by the dolphins) and there’s some cheesy Greek music. The more intoxicated among us get up for some dancing, spinning each other around as if we’d known one other for years.

The cruise has all of the perks of chartering your own private yacht – but in fact it’s better. As we link arms and dance under the stars I look around at the people I didn’t know a week ago: young and old, from different countries and walks of life.

Tomorrow we will go our separate ways but tonight we’re brought together by the magic of it all in a state of complete happiness. There is a word for this: the Greeks called it Elysium.

Find out more
Book Cruise
Published 03.01.23
Back to posts
Luxury

Treat yourself to a luxury superyacht cruise around Croatia

Superyacht holidays are the pinnacle of luxury, the preserve of royalty and Hollywood…or are they?

New cruise ships get us pretty jazzed here at Sailawaze so we’re thrilled that there are so many more to welcome onto the waterways of the world in 2023.